Do the right thing.

We hear it in different forms our entire lives. From childhood on, this message seems to be at the core of everything we’re taught. For Christians like myself, it’s often said more to the tune of “do the right thing because it’s what God would want you to do.” Personally, I fully believe that this is correct, and should be at the heart of our Christian beliefs. After all, if we profess our faith but don’t show it in our everyday lives by doing this proverbial “right thing”, then we’re hypocrites, plain and simple.

However, I also believe that in our society, the concept of “doing the right thing” is highly romanticized, especially through literature, plays, movies, and the like.

In The Chronicles of Narnia: Prince Caspian, we all cheer when Peter decides to fight a duel to the death with Miraz for the throne. In Newsies, we all rally behind Jack Kelly when he gives the bribe back to Pulitzer and joins the strike again. In the Little House on the Prairie books, we all admire Laura for vowing to become a teacher in order to make enough money to send Mary to a college for the blind. In The Princess Bride, we all root for Westley when he puts his life on the line time after time in the name of true love (or, “twu wuv”, if you’re the Impressive Clergyman). In fact, you can find a “do the right thing” moment in pretty much every book and movie.

Although I love all of these stories dearly, I think that because of them, we tend to go out into our lives imagining that there will be people applauding us when we do the right thing, and that our instrumental movie score will build up to a triumphant crescendo while sparkles float down around us.

As someone who recently had to do the right thing, I can tell you that unfortunately, this ain’t the case.

To put it simply, doing the right thing is hard. Really hard.

People probably won’t applaud you. In fact, a lot of them will probably “boo” you off the imaginary stage.

You probably won’t get a triumphant “you were right and I was wrong” moment from your adversary. Actually, you’ll probably lose some friends and make some enemies.

Truth be told, you may never get any kind of validation for doing the right thing, from any human being.

A while back, I had to do the right thing and cut off a friendship. It hurt me deeply—I had known this person for years, and never dreamed I would be having such a confrontational conversation with them. I would have never in a million years pictured being put in a situation like this one where I had to choose my Biblical principles of morality over my friend.

I didn’t get any applause from the other people in our friend group. Nobody acknowledged that I did the right thing. No one stuck up for me or defended me. I left, and I have no idea what kind of nasty things were said about me afterwards. I’d like to imagine that at least one person silently thought to themselves that I was right, or maybe even said it aloud, but I don’t know that for sure. I don’t know for sure that gossip won’t be spread about me, causing me to have even more enemies.

Oh, and that’s another thing—because of fictional stories like the ones I mentioned earlier, I think we subconsciously picture that the only real adversaries in our lives are going to be cut-and-dried “bad guys”, like the White Witch or Prince Humperdinck.

Unfortunately, life has a lot of gray areas. A lot of the time, “friends” can disappoint us or betray us in ways that might seem relatively small to someone who doesn’t understand the entire situation. Many times, we don’t have one, big, in-your-face betrayal that makes it obvious to us that it’s their problem, not ours. That’s kind of how modern, every-day situations happen: moral forks-in-the-road come up that can be minimized and made to seem small when they are, in fact, honkin’ big deals.

In those situations, we have a choice. We can a) follow the loudest voice, get stepped on, and compromise our morality, or, we can b) do the right thing. The former is definitely the path of least resistance, and it’s obviously one that a lot of people choose to take, but I hope by the time you’re done reading this article I will have convinced you that the latter is the better choice.

My friends…doing the right thing is not for the faint of heart. You might think that you’ll have this surge of righteous indignation and that you’ll know that this is exactly what you should be doing—but you probably won’t.

Now, I realize that this whole time, I’ve been painting a pretty dismal picture of what “doing the right thing” looks like. I mean, I’m not not going to sit here and tell you that there will always be that glorious, hero’s-journey moment when you ride off into the sunset as epic cello music plays…but the way I generally roll in life is not to sugar-coat things, but rather to offer a spoonful of sugar to help the medicine go down.

So, even though I may have just given you way more tough love than you bargained for, I’m now going to give you three reasons why you should be motivated to do the right thing, and why the often blatant lack of resulting applause is okay. Spoonful of sugar, comin’ atcha. 😉

You know, I often take some flak for being who I am: a girl whose wardrobe is 70% pink and sparkles, who works part-time as a Disney Princess, who spends her weekends knitting and sewing, and who drinks British tea and plays classical music while she studies. Just last week, my biology teacher was talking about how many animals are much more vicious than we would think at first. She then motioned to me and said,

“But if you live in a Disney, animated-movie world, then you would just assume that all animals are adorable and sweet.”

Read: awkward. Later that same day, she called me out in front of everyone because of the fact that I don’t cuss/swear, and heavily implied that I’m some sort of sheltered, wimpy little flower just because I don’t.

Unfortunately, a lot of people probably see me that way–as a girl who sees the world through princess-y, glittery, rose-colored glasses. My teacher probably assumes that I’m oblivious to the evil things happening in the world–either because my parents shelter me from it or because I’m too stupid to even recognize it.

Now, just to preface…I’m not trying to put myself up on a pedestal here. I’m only talking about me so much because I’m willing to make fun of myself, and I wouldn’t want to do that to anyone else. 😉 I’m by absolutely no means perfect, I just tend to think talking from personal experience makes this kind of thing more sincere, and like I said, I’m okay with making fun of my quirks. Okay, back to the story. 😉

Guys…I’m not who I am in spite of the world’s darkness–I’m spurred to be who I am because of the world’s darkness. When I see kids being bullied, or the increasingly immoral pop culture being promoted by the media, or my biology teacher devaluing human life to the point of saying there’s virtually no difference between turtle embryos and human embryos, I don’t shrink back into my animated, sparkly, pink cave of g-rated shelter.

Instead, my inner Newsie starts going on strike. That spunky little kid from Brooklyn in my head starts cracking her knuckles. I start putting on my red lipstick and My Little Pony t-shirt and getting ready to rebel. If the dark, evil world is trying to stop me from being my non-cussing, dancing-in-the-Walmart-aisles, cupcake-baking, fairy-godmother-ish self, then I’m going to do exactly the opposite of stopping–I’m going to kick the glitter up a notch.

That’s the first reason why doing the right thing is worth it–because you’re sticking it to the man (the man being the world). In fact, I wrote an entire article about that very thing. 😉 You don’t have to be a fearful captive to the world–instead, you can be a sword-of-light-wielding warrior.

You know, I also haven’t mentioned yet the one person who definitely makes all of this worthwhile–the person who does validate you even when no one else does–the person who will always root for you and applaud you when you do the right thing. It’s the same person who has a plan for your life and intelligently designed you and loves you more than you can ever imagine—it’s God.

And for our final reason…I know it might seem obvious, but I think in heat of the moment we tend to forget that there are other people out there who are trying to do the right thing in their lives, too.

The fact, plain and simple, is that you’re not alone.

You may not know any right now, but I guarantee you that somewhere out there are other Peter Pevensies and Laura Ingallses—other people just trying to find the path of light in this crazy, dark world.

In fact, you’re reading an article written by one right now.

I’m not saying I’m perfect–none of us are–but I am saying that as hard as it is to do the right thing–as much as you will undoubtedly tremble and sweat and cry just like I did recently–you’re not alone.

Take comfort in that, and don’t be afraid to seek out those other people trying their best to honor God. Don’t be afraid to walk away from your “friends” who are pressuring you to do the wrong thing. God has a plan for you, and I promise that somewhere in that plan are fellow right-doers.

To the one trying to do the right thing: 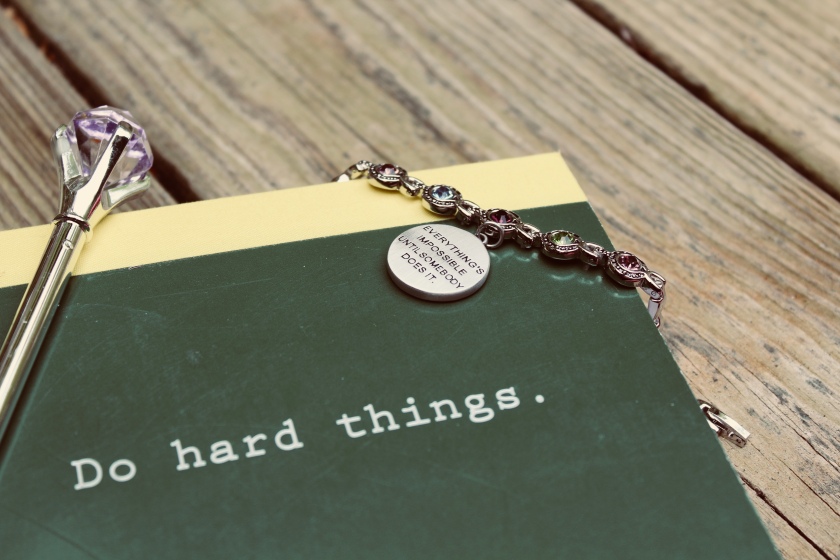 Mother/Daughter team to be an encouragement to all women. View all posts by heritageforher