Unfortunately, the Christmas season is over–but I’ll be honest, I’m kinda still basking in its glory. 😉 At our new home in NC, it’s still freezing cold and we’re getting our fair share of sleet, hail, and snow warnings, so I may or may not be playing some Christmas tunes. 🙂

This week, here on the blog, we’re going to be doing something a little different, which is telling a (hopefully) entertaining story about one of my experiences as a princess performer, which takes place on Christmas Eve in a Publix grocery store, and what I learned from it. Yep, I sound crazy already. 😉

Okay, so a little backstory…in 2015, I started making costumes and entertaining at kids’ parties and events. Mainly, I do Disney Princesses and the occasional superhero, but let’s be honest here: 90% of what I do is Queen Elsa from Frozen. 😉 Typically at a birthday party, I play Let it Go on my flute (‘cause I definitely can’t sing it 😉 ), read a story to the kids, and present a gift to the birthday girl. It’s always a wonderful, lovely experience, and these events have guided me towards a career path of (Lord willing) pediatric nursing. 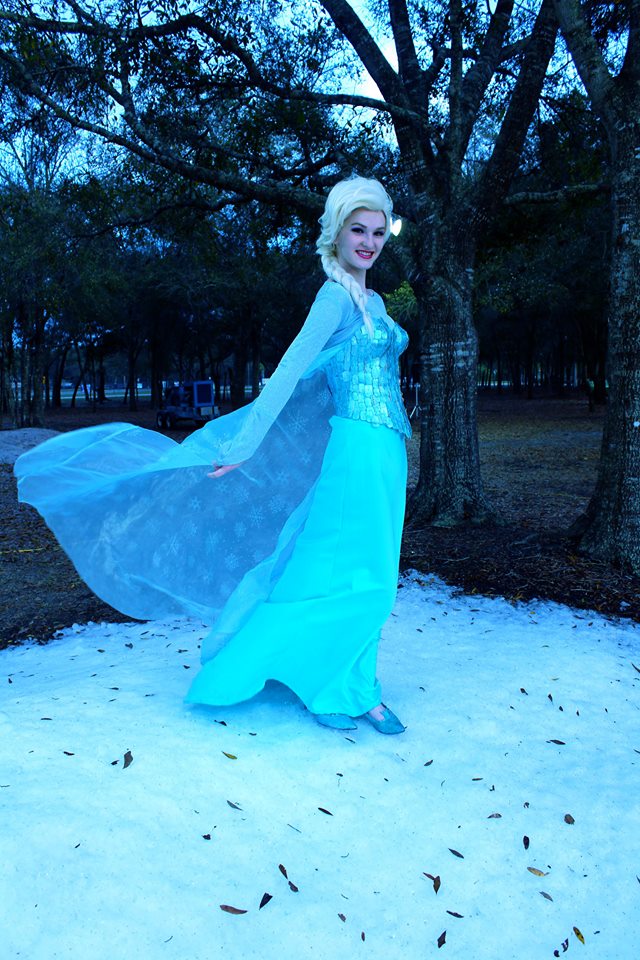 However, I’ve also done over the years a few different events. By different, I mean that not all of them involve Elsa simply coming for an hour and leaving. Back in 2015, I worked a few times on special occasions at my local Publix as a door greeter. It was really cool…there were lots of employees giving samples, balloons, and the like with music playing—and yours truly, Elsa, was right there in the middle of it. 😉 It was actually a little reminiscent of the incredible Publix Christmas parties they used to have back in the day (anyone remember those?).

The only slight disadvantage was that these special events went on throughout the day—I think the longest one I ever did was about eight hours.

I’m slightly kidding, of course…it wasn’t that bad. 😉 The kids were adorable, the other employees were wonderful, and these events were overall great experiences.

So, when I was asked to come for only four hours on Christmas Eve morning, from 8 am to noon, I was more than willing and excited. I even have a picture from the car ride there—I look totally happy and healthy, right? 😉 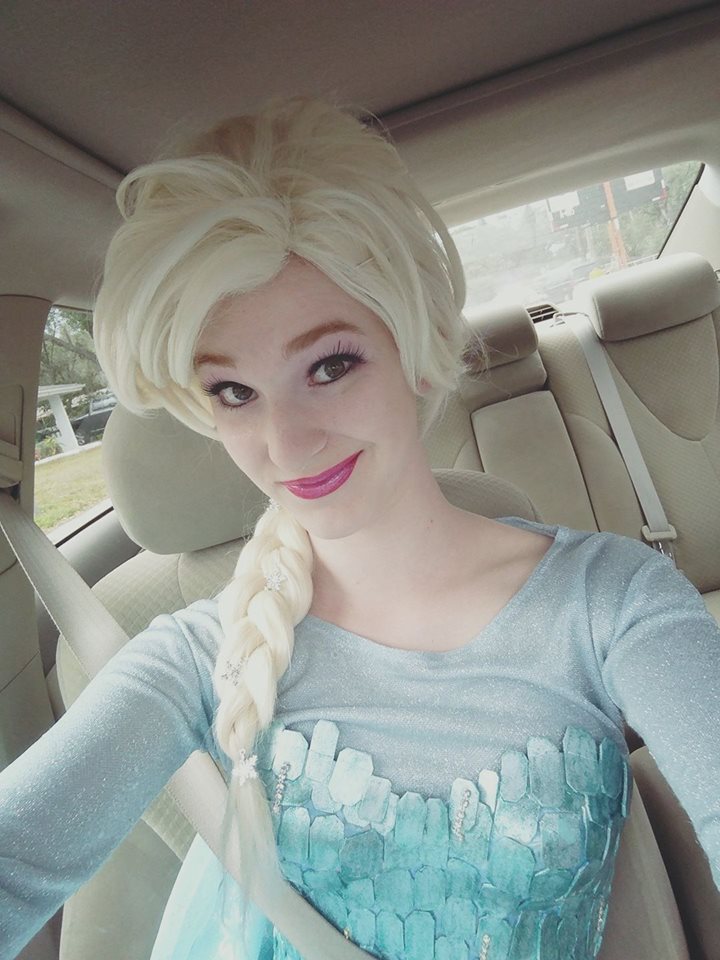 Well, something went wrong. I’m not sure exactly what, but I suspect it was a combination of lack of water, nervousness, and the snug ice bodice part of the costume, but I ended up feeling sick as a dog the entire time. It wasn’t enough to be serious (just a headache and stomach ache), but it was enough to make this snow queen a train wreck.

It was okay, however…I wasn’t running a marathon, after all. Thankfully, I got to stay pretty still, staying near the door, greeting kids, and taking pictures with them. On Christmas Eve morning, you better believe there were loads of kids, and I was thrilled to see them.

So I powered through the nauseous, swimmy-headed feelings, and actually started to feel better towards the end. Overall, the event had gone well.

About thirty minutes before noon (when I would clock out), a scruffy-looking man with a garbage sack over his shoulder approached me (Elsa), and said,

Needless to say, I let out a confused, nervous “um, no…?” before immediately striding off as gracefully as I could (which wasn’t very graceful at all) towards some kids who hadn’t met Elsa yet at the other entrance. I had never known what to do in a case like that, and while I didn’t want to make a scene (after all, he hadn’t been that creepy-sounding, just odd), I didn’t want to stick around, either.

About five minutes later, I shifted back over to the other entrance, where I found the manager of the store (the one who hired me) talking to this man. I caught a snatch of their conversation, which went something like this.

“…so you start at noon, once Elsa leaves.”

“Okay. I have my suit in the sack. Where should I change?”

Then it hit me.

I had been told that Santa would be coming later in the day to take over, but I hadn’t thought he would look like this (this man was not exactly a jolly, bowlful of jelly), and I certainly hadn’t expected a line like “are you my elf today?”

So, now I definitely had to apologize to Santa. I fumbled out what I tried to make a sincere apology and although he was fairly gracious, I think I definitely caught a jealous side eye from him as I left, since all of the little girls present were maybe a little bit more excited to see Elsa than Santa. 😉

Moral of the story?

The Lord sustained me through my work shift, and by His grace, Elsa didn’t faint, throw up, or anything of the sort.

Sure, I had to conceal my feelings and put on a smile the whole time (quite fitting for Elsa, if you’ve seen the movie 😉 ), but it turned out just fine. It was only for a few hours, and a lot of good came of it. It was only temporary, and temporary discomfort was okay. Being a trooper and sticking it out made a much better impression on the manager than if I had fizzled out in the first ten minutes.

(The note here, however, is that if I were feeling extremely sick, I would have of course told a manager and clocked out. You should always take note of your health and notify others if you believe it to be contagious or dangerous. Okay…end of Grace’s PSA. 😉 )

Even billion-dollar-grossing Disney princesses. 😉 I’m by no means a professional at Elsa-ing (or any character, for that matter), but I always thought I did pretty well at saying the right things, posing for pictures, etc.

Until I accidentally insulted Santa, I had never had anything go wrong before, and you can bet that I beat myself up over it for a while afterward…

…that is, until my older brothers, who were both home for Christmas, started cracking up over the experience. Truly, I had to laugh, too—it was an Elf-worthy moment reminiscent of the “you sit on a throne of lies” scene. 😉

Everyone makes mistakes, but the only thing you can do is learn from them, hopefully, find room to laugh about them, and don’t take yourself too seriously.

Mother/Daughter team to be an encouragement to all women. View all posts by heritageforher

One thought on “The Christmas Grocery Store Misadventures of Queen Elsa”